Following our reports in July and August 2021 on shortage of homecare workers, we conducted a third survey of Homecare Association members in November 2021. The aim was to test whether the situation had changed substantially since our last survey in August 2021. Our findings suggest a deepening crisis in workforce capacity.

Responses were received from 339 homecare providers, large and small, state-funded and private-pay funded, across all regions of the UK. Responses were collected between 2 and 10 November 2021.

Key findings were as follows:

COVID-19 vaccination as a condition of deployment is expected to be in force for homecare from 1 April 2022. The Statutory Instrument passed through parliament on 14 December 2021 but has not been signed at the time of writing.

As strong supporters of vaccination, we remain keen to ensure that as many homecare workers as possible receive both doses of the COVID-19 vaccine, as there is good evidence this protects the recipient from serious illness.

However, we advocated for a more empathetic and persuasive approach to increasing vaccination rates and are concerned that the legislative approach being taken could lead to a loss of up to a fifth of the homecare workforce when supply of careworkers is already inadequate to meet rising demand (at the time of writing, an estimated 78% of the workforce have received two doses of the vaccine).

The Government’s Impact Statement on Vaccination as a Condition of Deployment recognises that “we cannot be confident that the system – even with additional funding – will be able to absorb the loss of capacity resulting from the implementation of this policy, without further intervention.” Even so, it is not clear what further intervention will save the sector nor is there evidence of a contingency plan around how to provide necessary care should staff losses emerge.

We have repeatedly raised concerns about the risk of older and disabled people being left without care at home, if vaccination rates among the homecare workforce do not increase above current average levels.

An ADASS Snap Survey in November 2021 revealed that 1.5 million hours of commissioned homecare could not be provided between August and October due to lack of staff and 400,000 people are waiting for an assessment. Meanwhile the Nuffield Trust has estimated that the sector could have lost as many as 29,000 staff between April and October 2021.

The averages mask substantial regional variation. While nationally, 78% of homecare staff are reported as having received two doses of the vaccine and 84% having received one dose (figures at 18 November 2021); Lewisham and Barking and Dagenham (as examples) are reporting only 48% and 49% of independent CQC regulated domiciliary careworkers fully vaccinated respectively.

Meanwhile, as winter pressures build, the NHS Confederation reported concerns about social care capacity and it’s impact on the NHS: the NHS “welcomed the government’s recent extra investment in the NHS, but we cannot immediately buy our way out of this potential crisis due to the 90,000-plus vacancies in the NHS. It would be better to allocate more immediate funding, from the recent funding settlement, to social care services, as boosting the numbers of care staff will have much greater impact on reducing pressures on hospitals and other parts of the NHS.” Around 1 in 5 hospital beds are believed to be unavailable due to inability to discharge patients, many due to limited capacity in social care.

The government’s recent announcement about funding reform for social care and the latest White Paper (see our comment) makes no provision to address the deep-seated workforce issues affecting homecare and the wider sector. This is very disappointing.

The Homecare Association continues to call on the Government to:

About the collection method and response rate

Responses were collected though a self-selecting on-line survey of Homecare Association member organisations between 2 November 2021 and 10 November 2021. Responses were received from 339 homecare providers, large and small, state-funded and private-pay funded, across all regions of the UK.

The survey was completed by providers serving either predominantly state-funding or self-funding clients, and a mixture of both. As outlined below, many of these issues are affecting both the state-funded and privately-funded parts of the market. In some cases (for example, providers concerned about financial viability) the concerns are more pronounced in those providing state funded care. 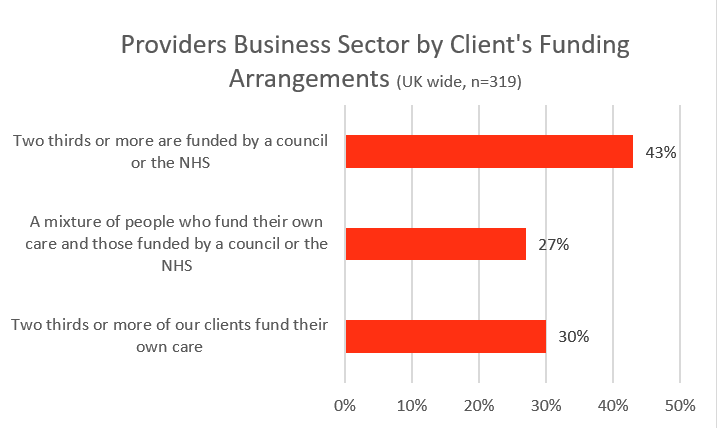 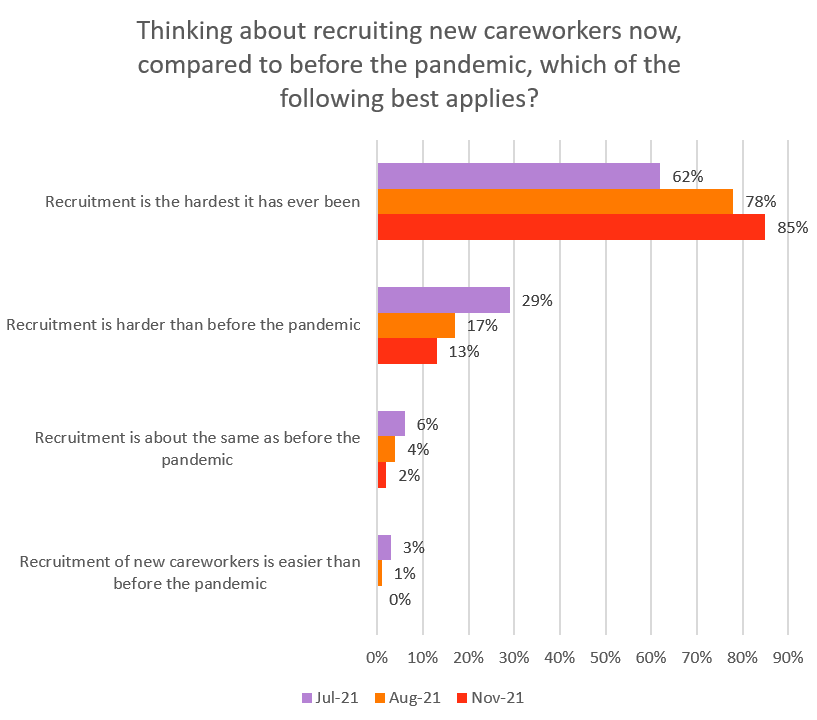 Difficulty recruiting careworkers is not confined solely to the state-funded sector, where recruitment of homecare workers is generally regarded as harder than in the private-pay part of the market. 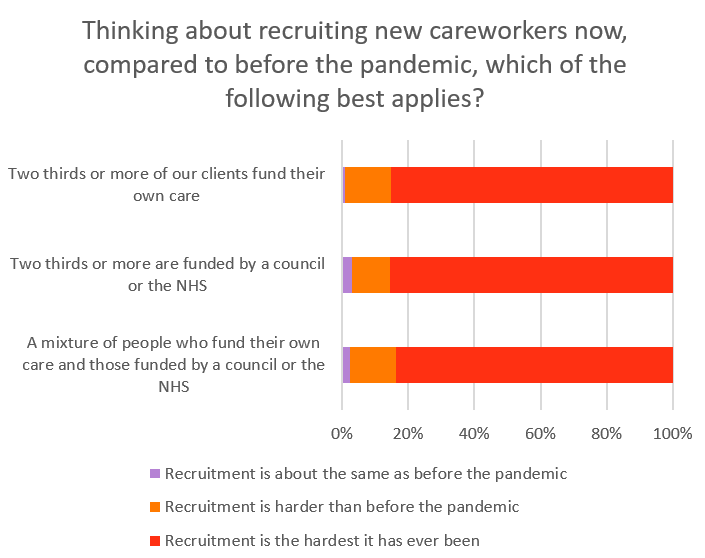 Anticipated impact of Vaccination as a Condition of Deployment on recruitment 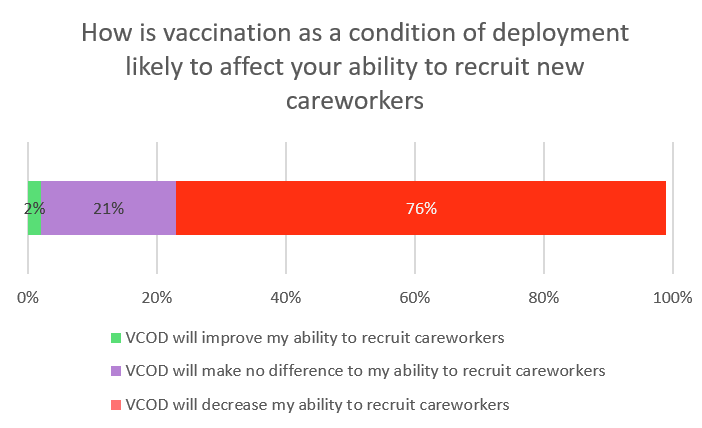 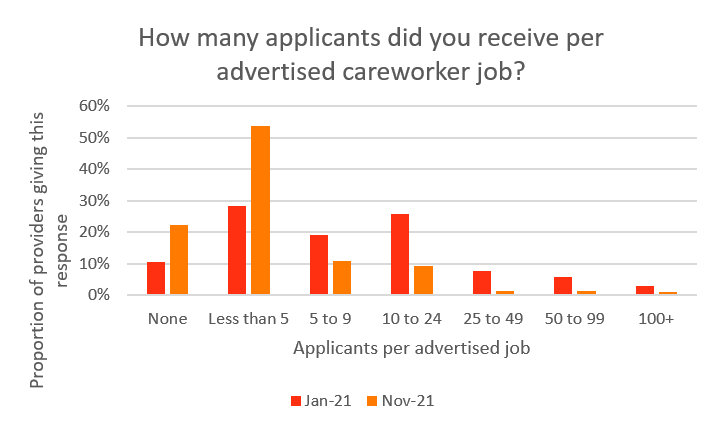 We asked how many vacancies providers had. The median answer was 10. The figure given most frequently represented equivalent to 11-25% of the organisation’s existing workforce. 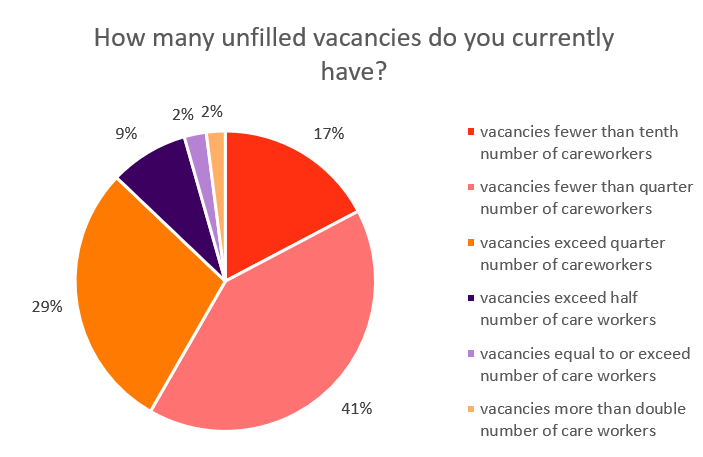 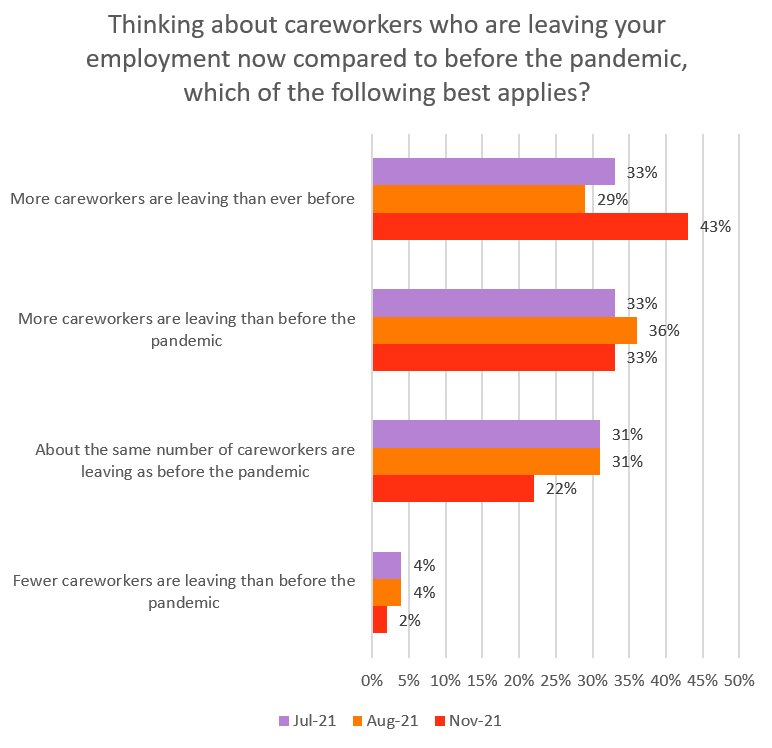 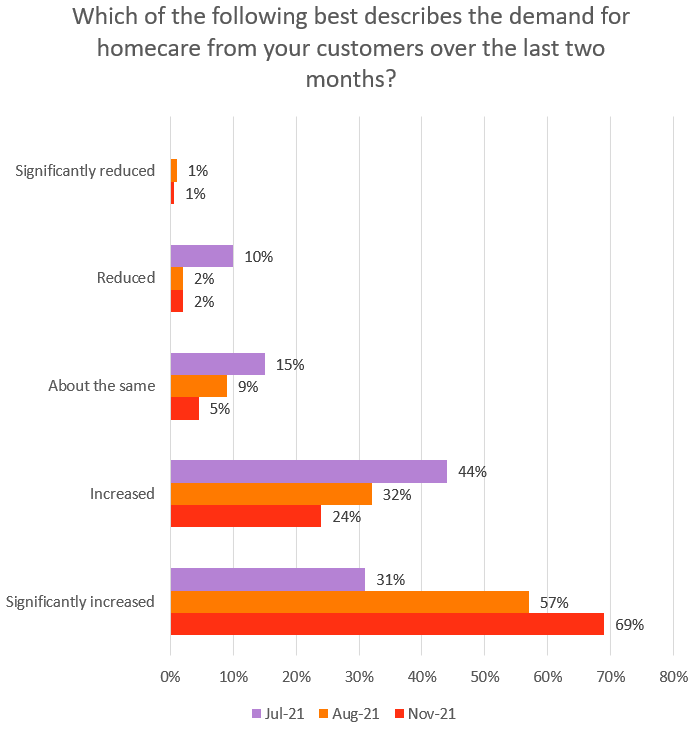 Reasons for challenges in recruitment and retention

Providers reported that the key challenges to recruitment and retention were:

Careworkers’ pay and available terms and conditions of employment were the greatest challenge to recruiting and retaining homecare workers, with 55% of employers describing that as the most significant issue.

This is, of course, closely linked to how the homecare sector is funded by the State, and what private individuals arranging their own care are willing and able to pay.

The option ‘other’ (not included in the below graph) represented a range of views, including employers stating that the pressures were so interlinked that it was difficult to distinguish between them. People making lifestyle decisions around not wanting to work split shifts and work/life balance featured. We also received several comments that the negative portrayal of the sector as a whole and the portrayal of careworkers role in the media was putting people off. Providers’ assessment of their ability to provide homecare to new clients

98% of providers reported that they were unable to take on some or all new clients, of which 45% said they could not currently take on any new clients. 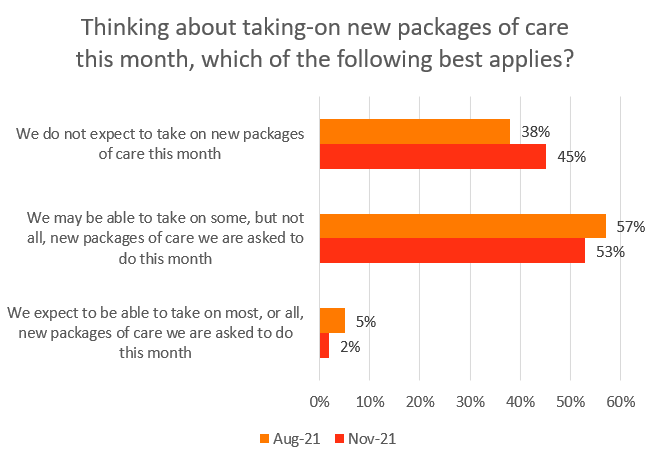 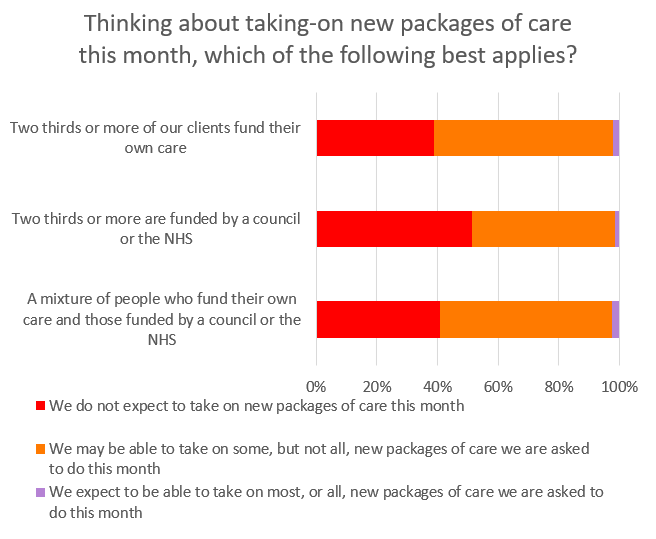 Please note that this question was only asked of homecare providers who delivered services to local councils or the NHS.

42% of providers reported that they are handing some or all of their existing work back to councils or the NHS, as they have inadequate staff to continue to deliver care safely. 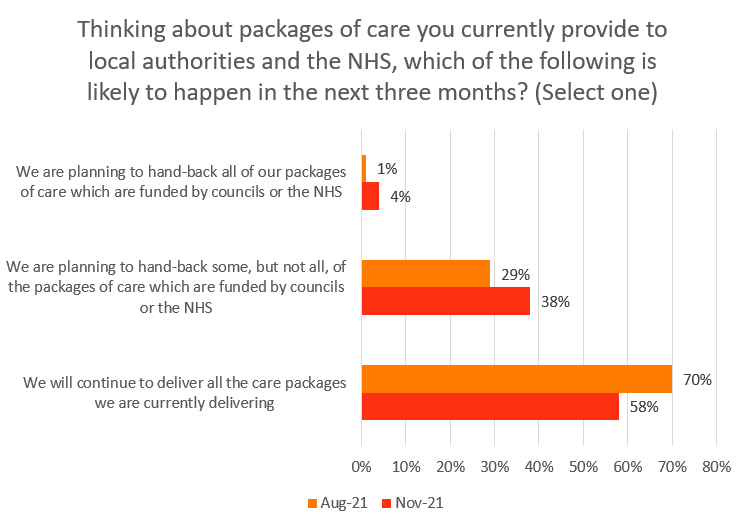 Some providers noted that the work that they were doing for local authorities or the NHS had decreased without handing back work because some care packages had ended (for example, due to a client going to hospital) and they had not taken on additional packages to replace this work.

Almost half of providers (44%) were very concerned about the financial viability of their organisation in the long-term. 30% were concerned. 19% slightly concerned, only 6% were not at all concerned. 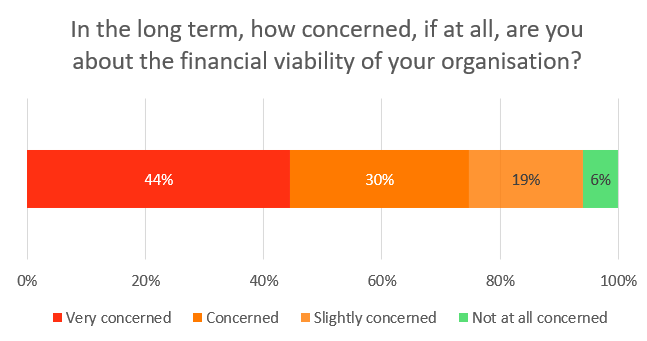 The level of concern was more pronounced amongst those providing council or NHS funded care. 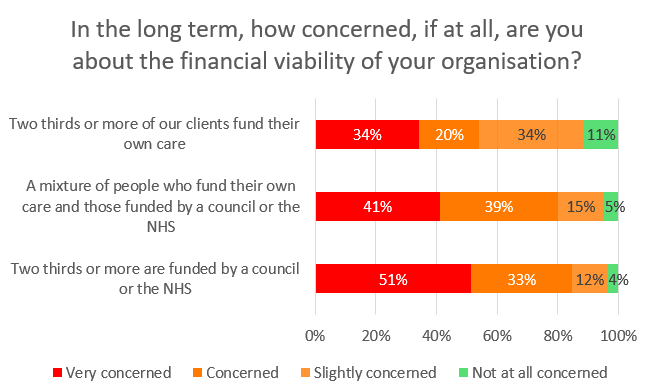 In this issue we reveal the results of our fuel and cost of living survey, provide top tips for your next CQC inspection, an update on our work in the devolved nations and much, much more.