Following our report in July 2021 on shortage of homecare workers, we conducted a second survey of Homecare Association members in August 2021. The aim was to test whether the findings in July were due to short-term issues related to COVID-19 self-isolation policies at the time, or to more persistent problems.

Responses were received from 843 homecare providers, large and small, state-funded and private-pay funded, across all regions of England. This was a record number of responses to a member survey, indicating the high level of concern among employers about inadequate workforce capacity to meet demand.

Key findings were as follows:

ITV News reported on these findings and filmed careworkers and care managers talking emotionally about the challenges they are facing, saying they are the worst they have ever experienced.

Lord Bethell dismissed our research as “anecdote”, when asked by Baroness Brinton in the House of Lords about government plans to help older and disabled people adversely affected by shortages of homecare workers.

Whilst the government is apparently denying that workforce capacity in homecare is inadequate to meet demand, some NHS hospitals are reporting critical incidents due to shortage of beds and inability to discharge people to community and social care services.

Though hospital discharge data are no longer reported in public, we know from our members’ experience across the country that demand for homecare is currently exceeding supply. When people cannot be moved back to the community from hospital in a timely manner, it reduces available beds for new admissions and lengthens waits for vital treatment.

A new survey from the Directors of Adult Social Services (ADASS) states that 13% of people are being offered care and support, such as residential care that they would not have chosen, due to recruitment and retention issues.

Vaccination as a condition of deployment is on the horizon for homecare, as the government has issued a new consultation on whether or not to extend vaccination requirements to other health and care settings for COVID-19 and also for influenza.

As strong supporters of vaccination, we remain keen to ensure that as many homecare workers as possible receive both doses of the COVID-19 vaccine, as there is good evidence this protects the recipient from serious illness.

We believe, however, that persuasion is likely to be more effective than compulsion at improving uptake, whilst minimising loss of workforce capacity.

Furthermore, recent evidence suggests that the delta variant of COVID-19 may be spread by vaccinated as well as un-vaccinated people, so the argument that vaccination reduces risk to others may not stand up. Other infection prevention and control measures, such as PPE, regular testing, ventilation, and thorough cleaning schedules, are also crucial and continue to be implemented across the homecare sector.

We could therefore lose 20 per cent or more homecare workers at a time when supply of careworkers is already inadequate to meet rising demand.

Workforce losses could be far worse if influenza vaccination also becomes a condition of deployment. Last year, ‘flu vaccine uptake among social care workers in care homes was around 33%. Figures have not been reported for homecare. Influenza vaccine supply issues last year meant that some homecare workers were turned away multiple times and eventually gave up.

The government’s recent announcement about funding reform for social care makes no provision to address the deep-seated workforce issues affecting homecare and the wider sector. This is very disappointing.

The Homecare Association continues to call on the government to: 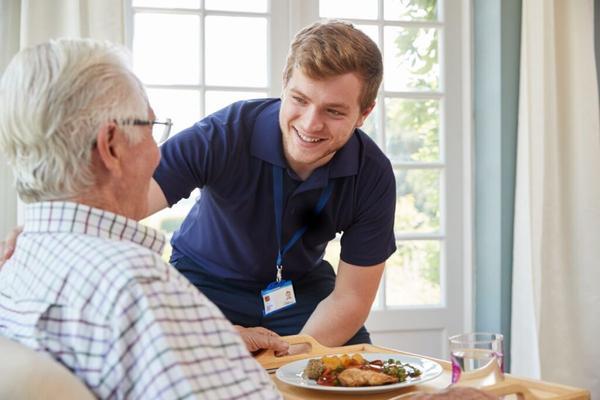 About the collection method and response rate

Responses were collected though a self-selecting on-line survey of UKHCA member organisations between 5 August 2021 and 10 August 2021.

UKHCA runs a number of on-line surveys with our member organisations, and this received the highest completion rate of any survey undertaken, which suggests to us how critical this issue is for employers.

843 respondents completed the survey. A further 34 started the survey, but did not answer all the questions and were excluded. The completion rate was therefore 96.1%.

The survey was completed by providers serving either predominantly state-funding or self-funding clients, and a mixture of both. Our analysis of the difference between these sectors suggests that while those in the privately-funded market reported slightly less extreme responses to the questions, they are facing similar problems. 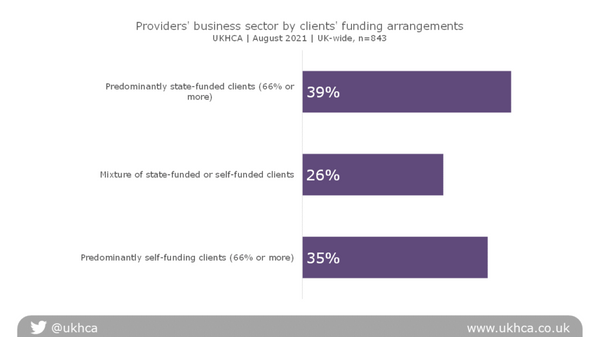 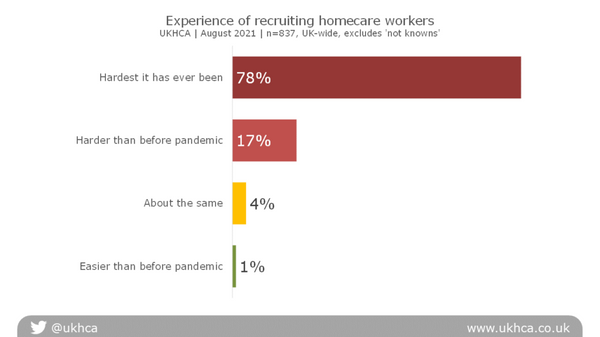 An analysis by government regions in England shows that, with the exception of Greater London, where the weighting of extremes was not quite so severe, this is a national issue. 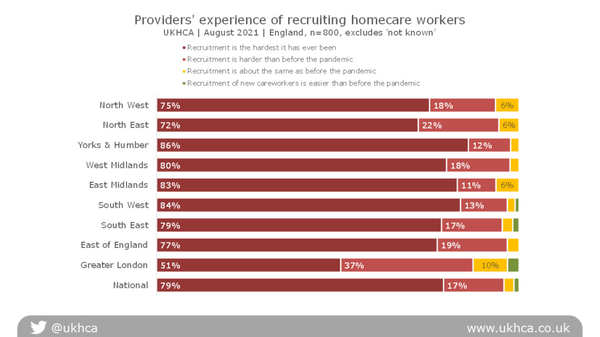 Neither is the difficulty recruiting careworkers confined solely to the state-funded sector, where recruitment of homecare workers is generally regarded as harder than in the private-pay part of the market. 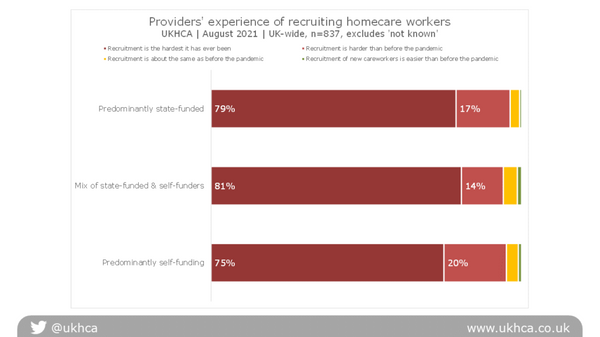 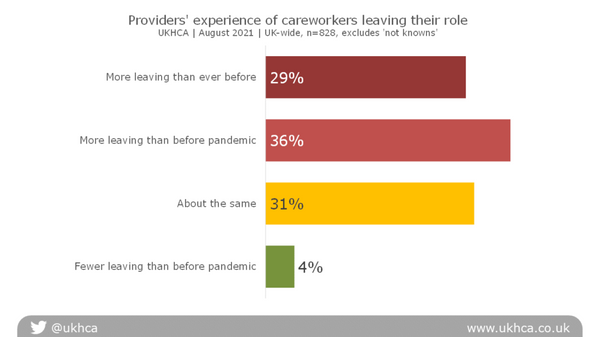 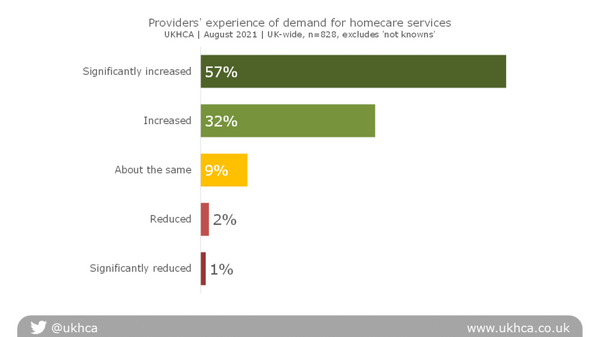 Reasons for challenges in recruitment and retention

Providers reported that the key challenges to recruitment and retention were:

Careworkers’ pay and available terms and conditions of employment were the greatest challenge to recruiting and retaining homecare workers, with 46% of employers describing that as the most significant issue.

This is, of course, closely linked to how the homecare sector is funded by the State, and what private individuals arranging their own care are willing and able to pay.

The option ‘other’ represented a range of views, including employers stating that the pressures were so interlinked that it was difficult to distinguish between them. 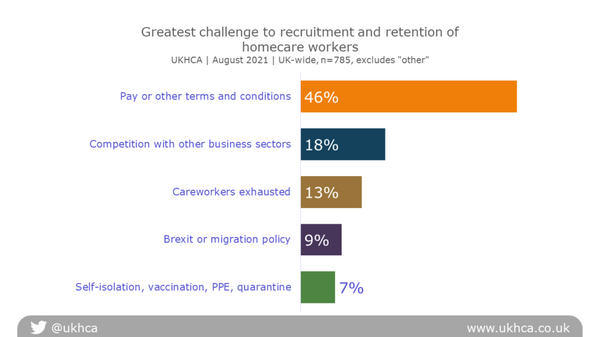 The regional breakdown of these data shows a reasonably consistent pattern, with some variation. 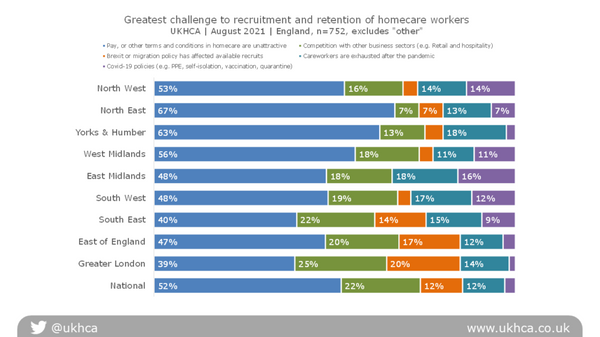 Providers’ assessment of their ability to provide homecare to new clients

95% of providers reported that they were unable to take on some or all new clients, of which 38% said they could not currently take on any new clients. 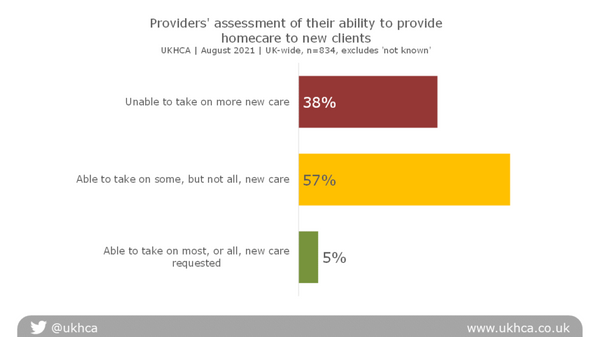 Similar patterns were observed across most regions, with the South West and East Midlands reporting the lowest ability to provide homecare to new clients. 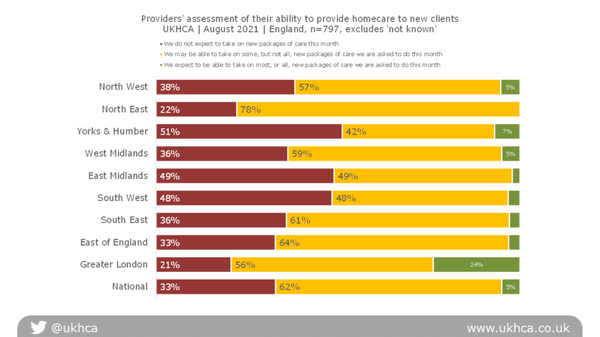 Please note that this question was only asked of homecare providers who delivered services to local councils or the NHS, accounting for a lower sample size.

30% of providers reported that they are handing some or all of their existing work back to councils or the NHS, as they have inadequate staff to continue to deliver care safely. 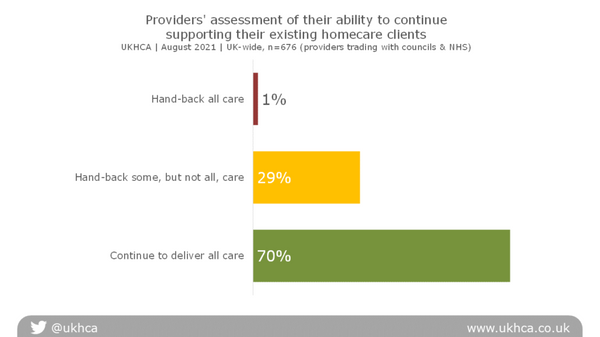 Issues with workforce capacity are visible in every region. A higher proportion of providers in Yorkshire and Humberside and the East of England reported handing all work back than in other areas. 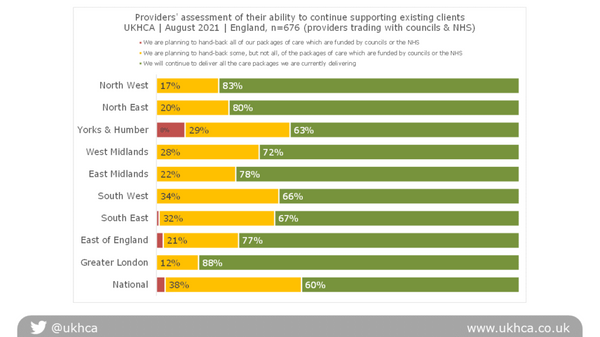 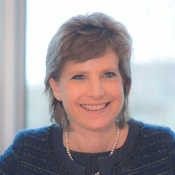