Who will care? Risks of making vaccination a condition of deployment in homecare

Findings from a new survey of homecare providers

A public consultation on introducing vaccination as a condition of deployment across health and social care closed on 22 October 2021 and the Government is still considering its response.

At the Homecare Association we strongly support vaccination of careworkers. We lobbied hard, right from the beginning, to ensure it was as easy as possible for homecare staff to be vaccinated.

We understand that people receiving services may expect careworkers to be vaccinated and the benefits that vaccination brings in protecting against serious illness. However we are extremely concerned by the intention to legislate rather than persuade, in the current recruitment environment. Tens of thousands of older and disabled people who are reliant on support may find that no care is available for them. Who will care for them?

The Government must enable the sector to address workforce shortages and have a contingency plan for the care of older and disabled people before introducing such measures.

We asked our members what they thought the impact of vaccination as a condition of deployment might be. We had responses from 150 providers across England who provide care to almost 27,000 people and employ 33,500 staff. This includes providers that focus on state-funded care and providing care to people who fund their own care. The survey responses were received between 8 and 15 October 2021.

This is what they told us:

How would vaccination as a condition of deployment affect homecare?

Two thirds (65%) of providers anticipated that the impact on their business would be severe if vaccination against COVID-19 and flu were required to deploy staff. 25% anticipated a moderate impact and 10% anticipated a low impact.

Providers highlighted that, given they were operating at capacity, there was a direct relationship between hours delivered and staffing levels. Respondents were very concerned about not being able to recruit staff if careworkers left. In many cases a 20% reduction in staff would mean a 20% reduction in hours delivered. Even the loss of one or two care workers may mean that decisions would need to be made about reducing the number of people supported.

Other concerns about the impact on businesses included: 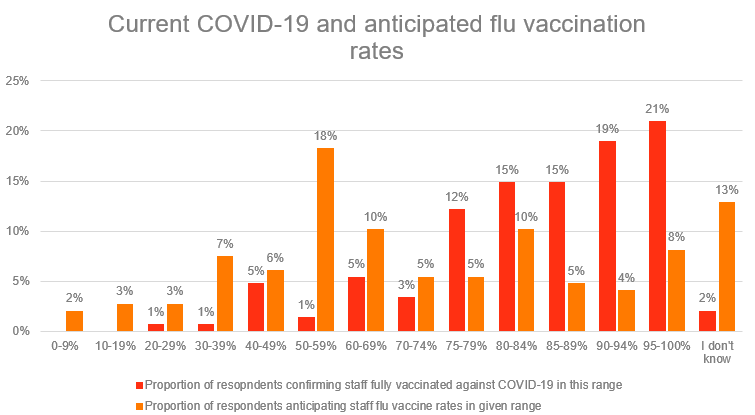 Of those reporting that they would lose 25% or more of their workforce all regions of England were represented apart from the South West. The North West, East of England and London were more strongly represented.

Those who did not expect the flu vaccination to worsen the situation (18%) tended to explain this through the fact that their vaccination rates were already high, or because the staff who were hesitant regarding the COVID-19 vaccine were the same as those that were hesitant about flu. Even amongst these providers, however, there were concerns about how this would affect recruitment and a lack of clarity about what new recruits may feel about the flu jab.

The impact on individual providers would be likely to vary considerably (as with COVID-19) In some cases providers felt that the number of staff that would leave would increase by 50% or more if flu vaccination was mandatory.

If flu vaccine uptake were to mirror uptake in previous years (see also: anticipated uptake graph above), then a substantial proportion of the workforce would not meet the requirement.

Between a quarter and a third of providers did not believe any interventions were helping and that the underlying issues were people’s strongly held beliefs or level of trust in the Government which were unlikely to be changed.

Providers listed measures that had been successful for them, which included one to one and small group discussions; good communications using a variety of formats; being able to pay staff time to get vaccinated; and external factors such as staff seeing vaccination as being a benefit outside of work. 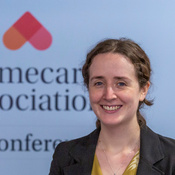