After decades of starving social care to the point of collapse, government’s announcement today about a new Health and Social Care Levy to help fund social care should have been encouraging.

The Levy will operate UK-wide and there will be a legal requirement to allocate the Levy revenues for spending on health and social care.

The devil is, however, in the detail and the reality is that the proposals are unlikely to solve existing problems in social care and risk creating new ones. 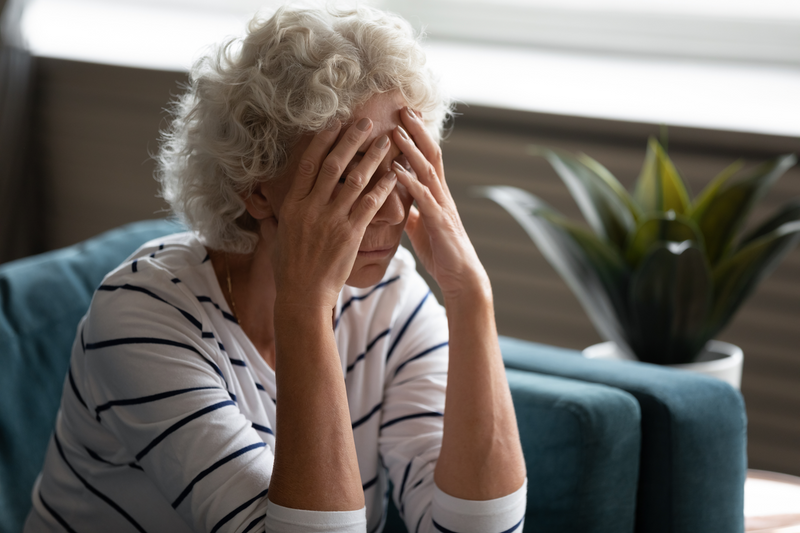 Raising National Insurance contributions by 1.25 per cent will raise £36 billion over the next three years.

Of this, £30.6 billion over three years will go to the NHS to help deal with waiting lists.

Only £5.4 billion over three years will be available for social care.

Of this, £2.5 billion will fund the “Dilnot proposals” and £2.9 billion will be available for wider system reform.

With regard to the “Dilnot proposals”, from October 2023, government will implement a cap of £86K on care costs.

Of potential significance, is an increase in the asset threshold for access to state-funded care, from £14k to £20K.

Those with eligible needs and assets below £20K may receive full state funding.

Those with eligible needs and assets between £20k and £100k may receive some means tested state-funded support.

In theory, this means that more people will be able to receive state funding for care.

Only £5.4 billion extra will, however, be available for social care over three years.

This means that eligibility criteria for state-funded care are likely to remain high and may rise even further.

Taken together, Scotland, Wales and Northern Ireland will benefit from an additional £2.2 billion each year on average as a result of the health and social care package.

In 2024-25, Scotland, Wales and Northern Ireland will benefit from an additional £1.1 billion, £700 million and £400 million respectively, which includes UK-wide spending such as vaccines as well as Barnett funding for the devolved administrations.

They will benefit from around 15 per cent more than is generated from their residents, equivalent to an average Union dividend of about £300 million every year.

Unfairness in the care system

The government also states it will tackle persistent unfairness in the social care system.

Under the current system, people who fund their own care often pay more than people who are funded through their local authority for equivalent care.

We agree this is unfair for recipients of care.

The government has not, however, been open and honest about the reasons for this.

Right now, because central government funding for care is inadequate, most local authority fee rates are too low to cover costs. This means that many providers rely on higher and fairer fee rates from self-funding clients to ensure sustainability of services. 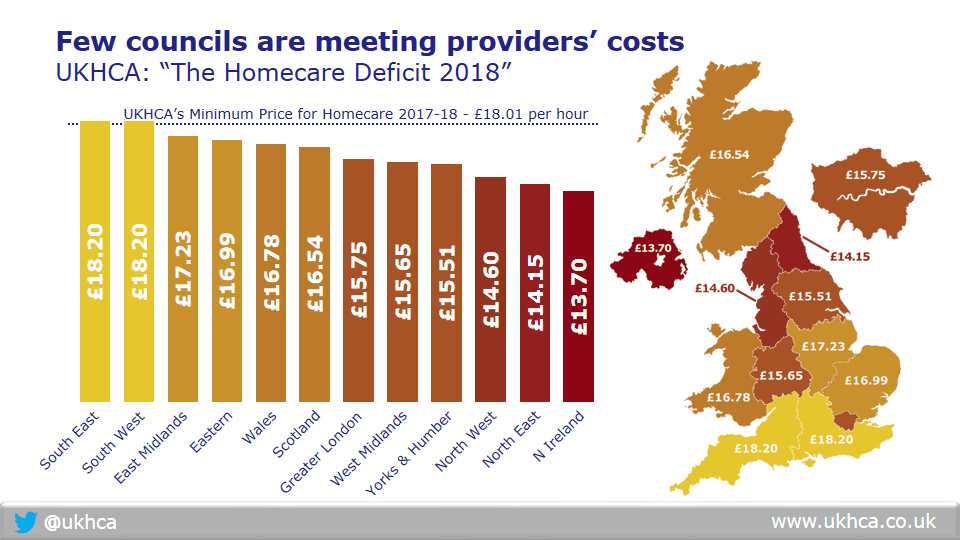 By bringing into force legislation included in the 2014 Care Act (section 18.3), government will ensure that self-funders are able to ask their local authority to arrange their care for them so that they can find better value care.

In other words, self-funders may be able to access care at local authority fee rates if they wish.

Duty to meet needs for care and support

(1) A local authority, having made a determination under section 13(1), must meet the adult’s needs for care and support which meet the eligibility criteria if—

(a) the adult is ordinarily resident in the authority’s area or is present in its area but of no settled residence,

(b) the adult’s accrued costs do not exceed the cap on care costs, and

(2) Condition 1 is met if the local authority is satisfied on the basis of the financial assessment it carried out that the adult’s financial resources are at or below the financial limit.

(a)the local authority is satisfied on the basis of the financial assessment it carried out that the adult’s financial resources are above the financial limit, but

(b) the adult nonetheless asks the authority to meet the adult’s needs. 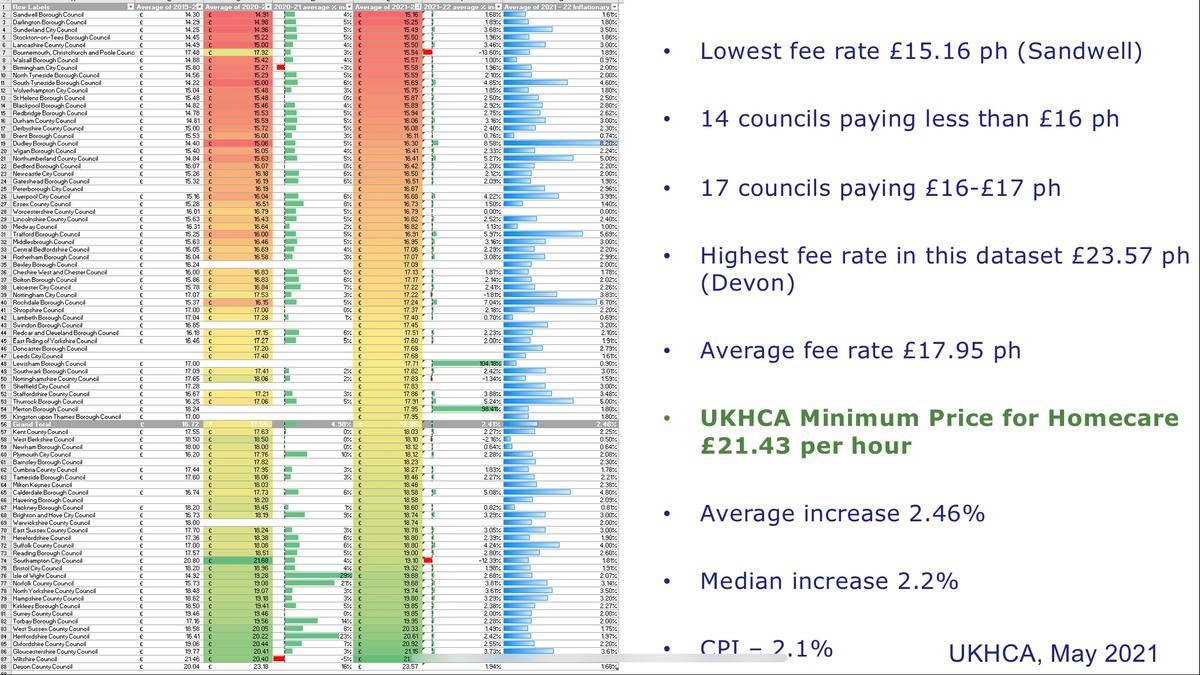 In homecare, we are already seeing local authorities put requests for care for self-funders on their procurement portals, which reduces the number of people purchasing homecare at sustainable fee rates.

This could result in even more homecare providers handing work back or ceasing to trade, further limiting capacity to meet need in the community and for hospital discharge.

Many providers will be unable to support people unwilling to pay a fair price for care and will not accept such referrals.

This risks leaving people without care, as now, so does not solve the problem of unmet need.

This reform is unlikely, therefore, to support stability of the sector and may even further reduce it.

Proposals on wider system reform are promised in a White paper this autumn, which government says it will develop with care users, providers and other key stakeholders.

Evidently £500 million has been designated for workforce training, qualifications and well-being.

This is a drop in the ocean and without adequate funding to enable pay, terms and conditions to increase above the legal minimum, there will be limited incentive for careworkers to pursue career development.

Some funds will apparently also be available to support housing, innovation and unpaid carers. Details of this have not yet been revealed.

This additional funding is separate from the local government settlement at the Spending Review in the autumn, which will supposedly address demographic pressures.

Central government funding for councils has been squeezed for years and has never been adequate to meet rising demand.

Our fear is that the government will use the fact that they have created additional funding from the Health and Social Care levy to reduce funding for social care at the Spending Review.

In conclusion, only an additional £5.4 billion for social care over three years is nowhere near enough to deliver the wider reform we so badly need as a society.

Continued inadequate funding for social care will have a direct negative impact on the NHS, regardless of how much money the government throws at the health service to appease voters.

UKHCA estimates that paying for existing homecare at the UKHCA Minimum Price for Homecare, as well as providing home-based support and care for an additional 1.5m people with unmet need, could cost at least an extra £11.7 billion per year.

Other commentators have suggested a social care funding gap of up to £14 billion by 2030/31.

Before this announcement, government spending on homecare was only 4 per cent of that spent on the NHS. In future, it is likely to be an even lower proportion. This makes little sense. 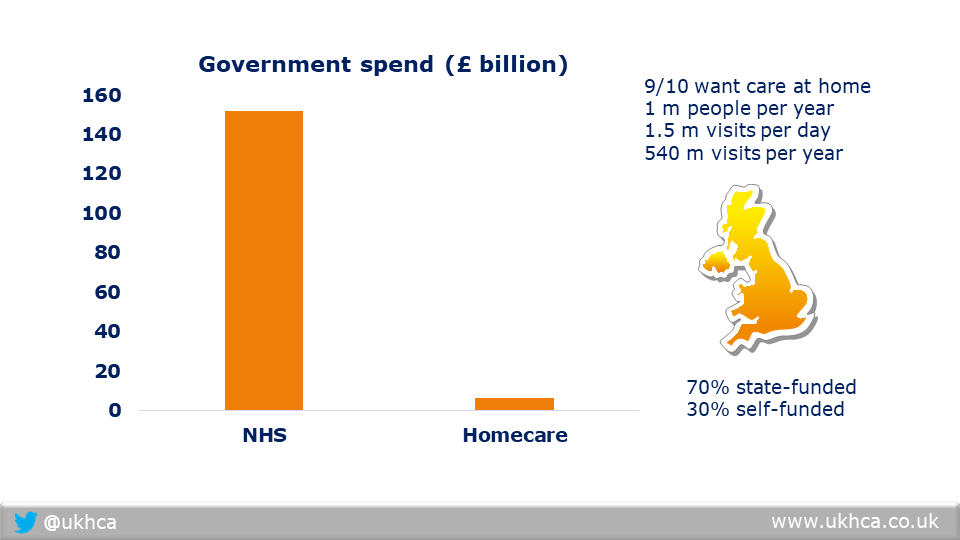 Quality, choice and control will still be poor due to budget constraints and unsustainable procurement, perpetuating poor commissioning practices, such as 15 minute visits and purchase of homecare by the minute.

We will still not have a well-trained, fairly rewarded workforce of adequate capacity to meet needs, including reducing demand on the NHS and supporting hospital discharges.

We are already experiencing the worst staff shortages in homecare in history and these proposals will do little to address the underlying causes.

We still won’t be fully harnessing the power of technology in care.

We still won’t be providing necessary support for informal carers.

And is there is still no vision for transforming the nation’s long term health and well-being. 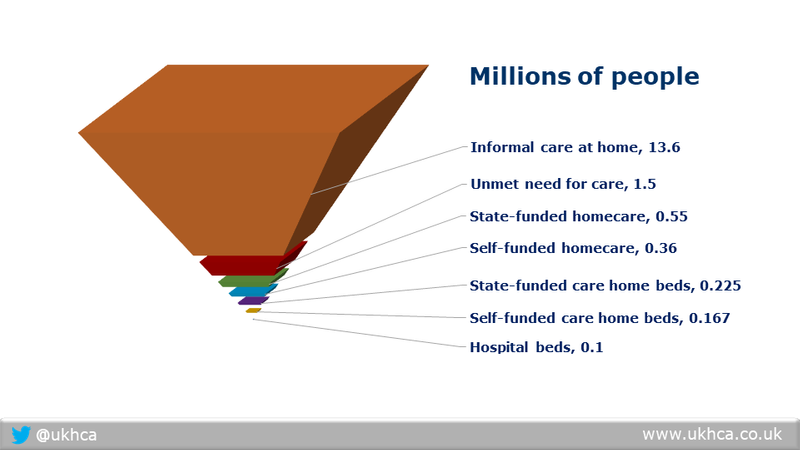 “Once again, the government’s focus is on the 0.5 million people in institutional care, rather than the 15 million needing support and care at home.

Home-based support and care plays a vital role in enabling us all to live well at home and flourish in our communities.

Investing in support and care early to keep people well at home, helps to prevent admission to more expensive settings of care, such as care homes and hospitals. This is better for individuals, better for the health and care system, and better for HM Treasury.

It makes no sense to neglect older and disabled people in the community, wait until a crisis point is reached, then transport them to acute hospitals, where they frequently lose function, deteriorate rapidly, and require even more long-term care.

High levels of additional funding for the NHS will have limited impact, if demand increases due to lack of preventative support in the community, and inability to discharge people back home from hospital, due to a serious shortage of homecare workers.

But this, it appears, continues to be the government’s strategy.”

After years of dithering, the government has wasted a prime opportunity to engage meaningfully with the electorate on how best to meet our health and care needs, now and in future. And, crucially, on how to create better lives for ourselves and future generations.

Politically, this may cost them. 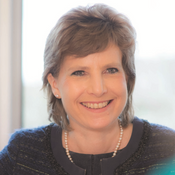 MPs warn of pressures on social care, amid criticisms of handling of pandemic

Have you responded to the National Provider Forum Wales Workforce survey?

Consultation on a National Care Service for Scotland ends 2 November

Have your say on plans for a National Care Service in Scotland. Deadline 2 November 2021.